I have been kind of a slacker with the blogging lately.  Probably because with work, I am finally back at a client.  Not that I didn’t enjoy having the extra time, but really sitting at home and trying to be productive with little to do isn’t that much fun either…

Plus with this contract, I am only working Mondays through Thursdays which leaves Friday for errands, chores, and/or a day with Maria.  This last week, I cleaned the house and ran some errands as we had company on Friday night. Dan, Angie, and Brianne came up for the night and hung out with us. It was a good time. I made some yummy meatloaf and cheesy potatoes. Also some Peach/Blueberry cobbler.  The cobbler was the only new recipe. It was good, but I’d like to make it again with some modifications. 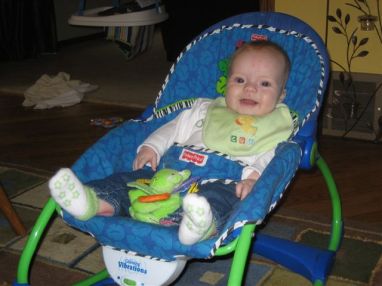 Hanging Out at home on Saturday

On Saturday, Chad and I went to the Gopher football game with his work. Chad’s parents came over to babysit.  It’s a good deal for them, Grandma gets to rock Maria, and Grandpa gets to watch the games in HD.  🙂   It works out pretty well for us too! 🙂

Last night, Chad didn’t sleep well, so Maria and I got up early (Maria led the charge on that one). I cleaned up the kitchen while she played, and then we headed out to Target. I ended up spending more time there than planned, because Maria fell asleep, and I knew she would wake up in the transfer to the car.  Once home, I made brunch, and put Maria down for a nap. Took a 20 minute snooze myself and then got up to watch the Packer/Viking game.  Maria’s nap went into the afternoon. She slept for about 2 hours. Then got up and played. She cheered on the Packers in her cheerleading outfit, from her blanket on the floor!   After being up for an hour, she fell asleep in her swing again for another half hour. She didn’t see much of the game, but I filled her in on the highlights, including Favre’s 2 record breaking touchdown passes!

Not a whole lot more than that.  Weekdays pretty much consist of work, coming home putting Maria down for a nap.  Getting dinner ready or doing laundry. Hanging out with Maria for an hour, sometimes 2, and then putting her to bed.  Although I did catch some of the premieres last week… (The Office, Grey’s, ER, How I Met Your Mother)