We had a very nice Easter weekend.

Saturday we were up early to go have Maria’s ears rechecked. Her ear infections were all cleared up, and the doctor was able to tell us what to put on her little patch of dry skin on her face, so hopefully we can get that cleared up after months. (She sucks her thumb and sleeps on her left side, so we think that it gets worse at night from drool!)

Saturday afternoon, we headed to her grandma and grandpa’s house (Chad’s parents). She got all dressed up in the dress that Grandma had bought her! When we got there she had an Easter basket filled with eggs which were filled with her favorite sweet potato puffs and wagon wheels (Thanks, Gerber Graduates!). Maria also ate some big person food too with us for dinner – strawberries and potatoes!

The next morning we were up early and drove to my aunt’s house in Darwin (home of the biggest ball of twine!). I think there were around 20 people there, including my parents. But probably more exciting for Maria were my 2 cousins’ kids (4 of them ranging from 4-8). They all played so nicely with Maria and she soaked up the attention! Unfortunately both my mom and I forgot our cameras. We also found out that my cousin Emily is expecting a baby herself, so Maria won’t be the baby for long!

This morning Maria woke up with a super goopy eye. I cleaned it up and Chad took her off to daycare. I had an eye appointment myself, so I asked my eye doctor about it. She said it was probably infected and highly contagious. Oops! So after my appointment I went to work, and then called the pediatrician to find out what they thought. They wanted to see her, so I picked her up early and we went to the doctor… again! 7 times since mid-February! They gave her some eye drops, but said she’d probably be ok tomorrow to go to daycare… at least it wasn’t pink eye and there was no ear infection to go with it!

Pictures from the weekend…

Pretty Girl – playing with the eggs from her Easter Basket! 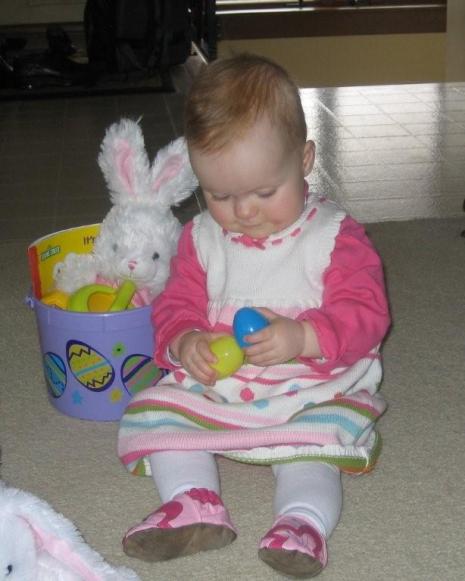 Trying to get the camera from Mom – that was more interesting than the basket on Easter morning!

Playing with her new toy lawn mower that the Easter Bunny left at Grandpa and Grandma’s house for her! 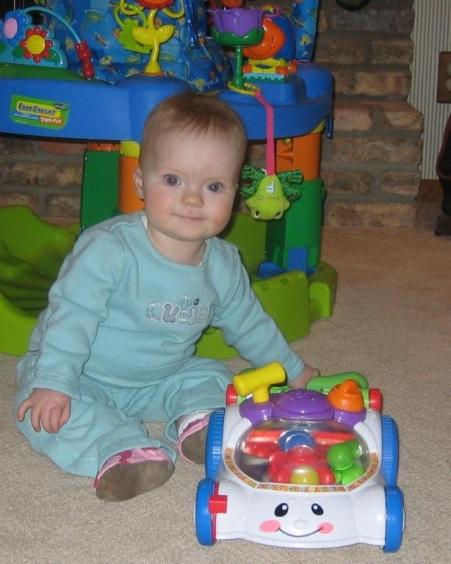 One thought on “Easter”