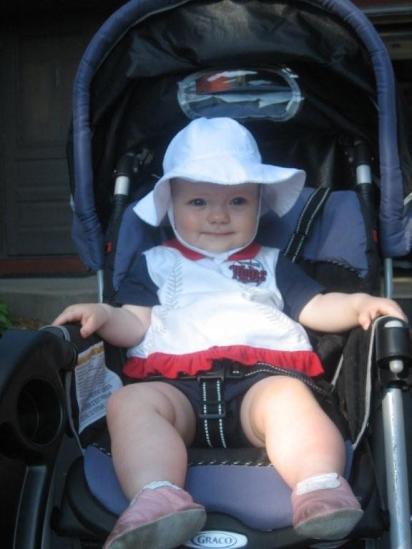 Saturday, Maria and I were up early and hit some garage sales. We found some great deals! Mostly on toys and found the discontinued Fisher Price Little People House that I wanted to buy for Maria!

After the garage sales, I headed to pick up some coffee for Chad. I ran into an old friend/co-worker who I hadn’t seen for a while. She and her husband and baby daughter just live a couple miles from us. I dropped off Chad’s coffee and then headed to my Weight Watchers meeting and ran into the same friend there! Apparently we were supposed to see each other on Saturday!

Saturday afternoon, the Peterson’s who were in town from Portland came over to meet Maria. We then met up with them for dinner with some other friends too. We went to La Chaya Bistro in Minneapolis. Interesting restaurant that has recently been transformed from a KFC!

Today, I worked in the yard. I cleaned out a lot of landscaping and spread mulch in several areas. It was a hot day and I think I may have come away with a slight sunburn… oh well… This evening Maria and I headed to the park while Chad mowed the lawn. She was pretty popular with the other kids, who all wanted to hug her. She also sported her Twins outfit for the first time this year and we like to think it spurred them on to beat the Yankees this afternoon!