Turns out my weekend update has been drawn out more into an update for the week!

Friday – Maria and I ran some errands and laid low. We headed to the MOA, where she wanted “Teddy On“, so she could walk. I know people say they would never put their kid on a harness, but seriously, would you rather see a kid running through the mall with a teddy bear strapped to her back, or one screaming in her stroller to get down.

Saturday – We went to see Santa (at the Nissan dealer). Maria sat in his lap (with me close by) and then proceeded to play in their toy area with a bunch of dirty toys while Chad appeased a salesman by talking about Nissans that he would never buy.

I also ran around on Saturday trying to find a toy that Grandma wanted to get for Maria. I finally found it, but it made me happy that I was done with my shopping! Saturday evening while I was getting ready to go to the annual Fluegel Christmas party, Chad complained about his stomach feeling “knotted up”. I left the party early when he called to say he was sick.

Sunday – Chad was recovering and Maria and I hung out. We did some grocery shopping, decorated the tree, and watched the Packers lose in the final minutes of the game.

Monday – Maria was back to daycare. I went back to work. Chad stayed home to recover some more.

Tuesday – Early A.M. Maria woke up and I got her a little snack (since we cut off her evening bottles when she got the bug, I am learning to feed her closer to bedtime, but didn’t do very well on Monday). I went back to bed, but shortly after, my stomach got “knotty”. Around 4 a.m. I was hanging out on the bathroom floor. Shortly after 6 a.m. the phone rang, the bug had attacked daycare and daycare was closed. We were all home yesterday. Chad was hanging out with Maria, while I hid out in the bedroom so I could relax without her knowing I was home. When I did come out, she seemed to get that I wasn’t feeling well and played very well by herself.

Some pictures from the last couple days:

Putting on her own coat. Ready to see Santa!

Surprisingly, she didn’t hesitate to sit on Santa’s lap (of course, I was right there)

Lately, she’s taking to walking around with this bucket on her head. Shhhh…. Maria hide! 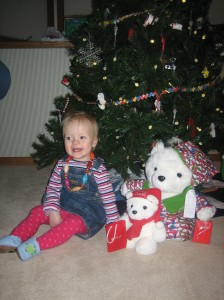 Maria with her Santa Bears

She has also become obsessed with getting her swimsuit out of the drawer and putting it on… her head!