The kids and I laid low this summer with our extracurricular activities.  Swimming lessons and that was it!  Gotta say it was nice!  of course, that maybe made our transition back by adding them back in a little crazier!

Not to mention, we seemed to have transitioned preschool tuition directly into funding our new activities!

so yes, we continued swim lessons through the end of October, but also added in Sunday School, gymnastics and piano lessons for both kids.  Plus now Charlie is officially a hockey player (!) and Maria starts basketball next week.  Maria also started chess club… whew.

It’s all good. The hardest part is setting priorities and not going overboard. It’s really important to me to keep this fun for them. So for now, piano – I’m not strict about practicing… I kind of anticipate it will wear off for Charlie. Maria practices on her own for now.  It’s still new. I hated practicing as a kid – my teacher didn’t want to teach me anymore when i didn’t practice.  Essentially, I was fired from piano lessons.  I, of course, regret that now.  I took piano again in college, but it would have been a lot easier to learn when I was younger!

Hockey & Basketball are where their passions lie.  At least for now.  Charlie could not be distracted or deferred from wanting to play hockey. Believe me we tried to distract him with other ideas! Neither Chad or I have had much experience with hockey.  Fortunately his cousin’s have, so we have uncles and aunts that are helpful! Charlie has had 2 practices and loved them both! He’s pretty cute in all his gear.

Maria starts basketball next week.  It was supposed to be tonight, but there was some drama with another parent and the team her daughter ended up on.. So we graciously switched (along with another friend, so they remain teammates).  Still not sure if it was the right decision.  I would never have asked to switch based on not knowing the other girls, but I don’t know the situation.  It might be the girl, it might be the mom – whatever I just didn’t need to match the drama and put the poor volunteer coaches in a even stickier situation.   Still looking forward to the season, because this is Maria’s sport.  She loves it!

For now, here’s a picture of our hockey star… Basketball to follow once we get up and going… 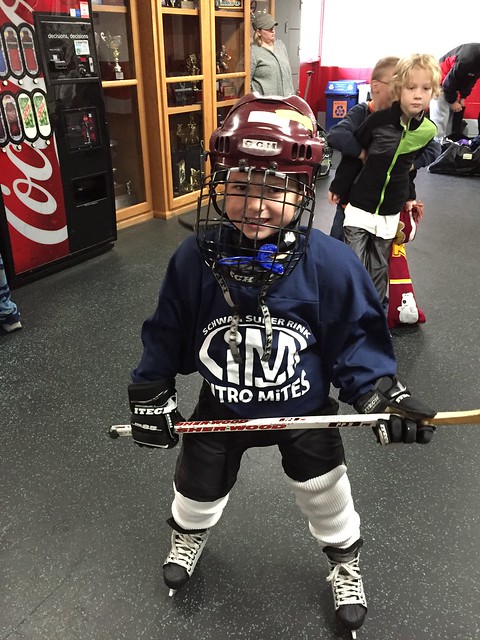