This may become our new favorite place to hang out this summer.  We discovered this yesterday in an impromptu playdate.

Prior to playing at the Splash Pad, the dads got to work out, moms got to catch up while the kids played under supervision of other adults. You’re wondering where it is? It’s a secret. 🙂 Bake me some cookies and I may ‘fess up.

Today we had some friends over for a playdate and to help me move some patio furniture and then get the kids out of the house, while Chad is in Nashville for March Madness.  We went to the park down the street from us.  4 kids all together and 2 moms.  We went to the park that I like better for Charlie.  Slides that aren’t ridiculously tall or need ladders to get to.

But he still fell… 5 feet to the ground.  It happened so quickly, but yet, so many things went through my head in that split-second.  He stepped off the side where there wasn’t a railing because there was a ladder-type thing to climb up.  And because his momentum was not going towards the opening, he fell kind of sideways and forwards, so he landed on his side (not on his head or awkwardly on his feet) And somehow he also managed not to hit anything (ladder-type toy with 4-5 METAL bar steps) and just landed on his side in the soft mulchy wood chips.  The moment I saw it happening, my instinct to go to him kicked in, but then something stopped me.  I’m not sure what it was. All the possibilities of what could go wrong, ran through my head, but yet so far we have had nothing wrong.  Best case scenario.  My mind and faith can’t keep from thinking there was someone watching over him that kept him falling in exactly the right way so he didn’t get clobbered on the way down or when he actually hit the ground. And maybe that someone also stopped me from getting in the way when I saw it happening.

He cried as soon as he hit the ground.  I ran to him, picked him up and held him and asked my friend Sara what I should do.  She knew to have him move his arms, to understand if his range of motion was affected.  He didn’t want to cooperate, because he was howling!  And once we (including Charlie) figured out he wasn’t hurt too bad and we decided to go home, he got even more upset, because he was not ready to go home!

On the way home, I decided to take him in to the doctor just to be extra careful.  It was a long wait, but luckily it was nap time so he was happy to sit in my lap and watch Thomas and Curious George on my phone while we waited.  (thank you Netflix)  And he checked out just fine.  Although I still need to check him every 4 hours tonight. Unfortunately it is 9:30 and I’m still trying to get him to go to sleep.  Darn 4 o’clock naps throw things off!  But it’s hard to be mad, with so much to be thankful for.  A lot of things could have gone wrong today and the worst part of my day was sitting at Urgent Care for 2+ hours with a healthy child!  Charlie got a lot of hugs and cuddles today.  He still might get more if he doesn’t fall asleep soon!

Maria went with my friend Sara and her girls. And is now spending the night at their house. Her first sleepover at a friend’s house.   She didn’t even notice he fell, which was frustrating at the time because she was so unfocused about why we were leaving and making a fuss about Charlie. But now I’m glad.  Her memory is a steel trap and she is constantly recounting our car accident in January to me, so just one more thing to keep her from “worrying” about.

All the kids piled in one stroller on the walk home from the park. BTW – Look how BIG Charlie is. He barely fits in the front of our stroller!

Looking forward to having Chad and Maria home tomorrow.

We are so glad you are here. Please stay. Don’t leave us until Summer is here to take over.  Please please please!!

You can’t see Maria’s tears here, but she just fell off her bike, so Charlie is taking her back to the driveway to play with chalk. 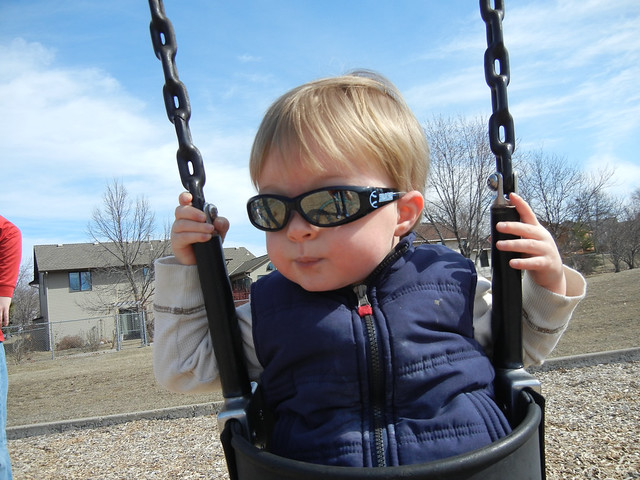 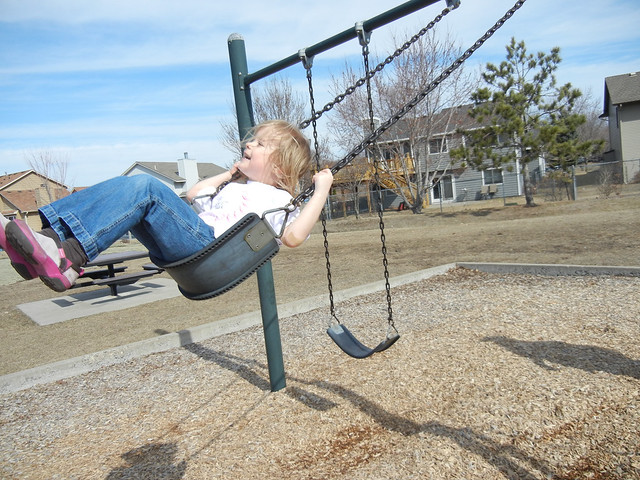 We didn’t get much, but we finally got a little snow and Charlie finally got to wear his snow pants! He loved it! All boy! He helped shovel the whole time Chad was shoveling! And cried when they were done, so then Chad pulled him around in the sled for a while, and he even got in a quick swing on the playset.

Note: the wall behind him that I “took out” last week with our truck.

As we are recovering.. yes again.  Maria from Strep & Charlie just from a nasty cold/cough, we spent the day and evening at home.

But it was in the mid-40s, so we did get outside for a little bit. Most of the toys are put away for winter, including the bikes, so we just got out the “little” bikes.  Even though both kids were a bit too big, they still enjoyed the time outside.   Rumor is that snow is on the way, so maybe we’ll be able to get out the sleds tomorrow!

Saturday morning, we had swimming lessons. Our first lesson in several months. Maria was a bit apprehensive but warmed up quickly.  She just wanted to be on her tummy and swimming around!

After a mid-day nap, we headed out to Baby Loves Disco.  We met Sarah, Lilah, and Lilah’s cousin Lucy.  Maria again was a bit apprehensive at first, but warmed up. She danced a little, played a little, ate a little, talked a little, and got a tattoo of a school bus on her hand!

On Sunday, Maria’s cousins Jana and Luke came over (Aunt Kim & Uncle Chip too). We hadn’t seen them since early January. The kids had a blast! We even got some outside time in!

Today after work, Maria and I went outside for an hour after a quick snack. Maria had fun going in a circle (around the cul-de-sac). About the 3rd time around, she loudly observed (and pointed) “that’s Ron and Nancy’s house!”.  So we went, rang the doorbell, and said hello. Maria proudly showed them her boots. And when it was time to go back and walk around the circle again, she said “Nancy, too?”.  Unfortunately Nancy couldn’t come out with us, but asked Maria if she’d like to go to the park sometime this summer.  Maria of course, said yes!  After going back to the circle, I convinced Maria she could step in the puddles, and she decided that splashing was fun!

We are loving the spring weather!!!

Today we went to a fall party hosted by one of Chad’s co-workers. Maria wore her Halloween costume! My mom made this moose costume several years ago for my nephew.  We were nervous Maria wouldn’t want to wear it. She didn’t seem to like the hat at first, but when she has the whole outfit on, she doesn’t seem to mind one bit.  In fact, she said “oh – oh” when it would slide off. After we got home, she took a nap, but when she woke up we all went outside to tackle some leaves. Chad did most of the work, but Maria and I helped too!